When you call Rome, “all lines are busy at the moment”, the invitation to a video call comes from the secretary, and the interview is organised by the press officer. But this is not about a corporate boss. Giovanni Ottati, head of the Italian telecom service provider VueTel, earns money for himself and his 25 employees almost exclusively in Africa. For a long time, he did well there in his market niche. But now the competition is getting tougher in Togo, Benin and Burkina Faso. A story of David against Goliath and how the blockchain is now supposed to fix it.

We help with the international transmission of voice and data between telecommunications companies to and in Africa. This communication is not only provided by the network operator itself, but also by a number of external service providers. We are one of these companies, whereby we mostly operate on the last mile, so to speak.

Our clients are exclusively the telecom companies. When the branch of a European company in Togo wants to communicate securely with its headquarters, it usually does so as a customer of the local network operator. The latter also uses external service providers for this, for example us – with technology that we have installed and operate.
Africa was more promising than Eastern Europe

You started your business in Africa. Why ?

Because I only saw an opportunity there. In Eastern Europe, for example, massive investments had been made by the big telecom companies early on. With a wide range of services offered by the network operators themselves or a large number of external companies. Africa, on the other hand, was initially less in the focus of the industry, and there was not yet so much competition there.

How did you found VueTel ?

I am not a trained telecom engineer or technician, but I worked for a long time at Italcable and then at Telecom Italia, at last as the person responsible for Africa, the Mediterranean countries and the Middle East. In 2009, I set up my own business in Tunisia because I had grown up there for a while and had a special relationship with the country. Beforehand, I had carefully considered my future field of activity in a six-month analysis.

What kind of people do you hire ?

Only university graduates. They earn their first professional spurs with us and thus stay longer. Our current staff of around 25 all work in Rome. About 15 are from Italy itself, the others from Iran, Burkina Faso, Niger and other countries. At its peak in 2017, VueTel had 50 employees. This included 15 people in Tunisia, our most important market at the time.

Burkina Faso was a risk – but it worked out

How did you get into Burkina Faso, your second market ?

I knew the managing director of the third largest network operator there, who persuaded his company owner: We then installed satellite dishes and switching technology to better connect his company to the international network. At my risk – so I invested everything and they paid me later. It was hairy, but it worked. 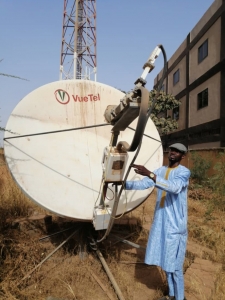 Who specifically did the work in Burkina Faso?

A local engineer. Since I couldn’t pay him and didn’t want to take the risk of running my own business there, I persuaded him to start his own company, with me as the only client. Over time, he hired two more engineers, whom he found among his acquaintances and friends at my suggestion. It is practically outsourcing, my partner pays his taxes and duties. We ourselves have nothing to do with the authorities, nor with licences or permits.

With blockchain against the competition

What stopped your growth?

Since around 2017, we have had to reinvent our business. Africa’s telecom markets are growing extremely dynamically, but in the meantime the big companies have also invested massively in North and Central Africa, with  fromOrange France in the lead. The situation there is now similar to that in established markets: a lot of competition for individual services and low prices.

How did you react to this?

We remain in our traditional business, but at the beginning of 2021 we started a new branch: securing international voice and data traffic using blockchain and artificial intelligence. If you call Ethiopia today and only hear an automated greeting, it may actually be busy at the recipient’s end. But the call may also have been “stuck” with one of the many service providers in between, for which you as the caller pay in case of doubt. Our technology prevents this.

And none of the giant telecom companies has developed something like this yet?

No, it is the first anti-fraud system in telecommunications. We have no competitors and have applied for patents; some competitors have already tried to copy us. Our system was developed largely by a blockchain expert I hired in 2019, after careful consideration of the concept. I know we have billion-dollar budgets against us when in doubt, but I’m confident.

Banks won’t lend to the SME

How do you finance yourself?

Exclusively from my own funds. Even my start-up capital back then consisted only of my severance pay at Telecom Italia of 200,000 euros. I don’t come from a wealthy entrepreneurial family. To this day we have no debts, by necessity.

At least not to us. The banks want collateral on a scale that I – and other small SMEs – simply cannot provide. But above all, it’s because of our market, i.e. Africa, that I don’t get anything.

Banks are very careful not to get involved in money laundering deals. And they operate on the principle of “know your customer”. Unfortunately, Africa is still largely considered terra incognita. Stereotypes of poverty, corruption and mismanagement prevail. Yet business there offers just as many facets as elsewhere, and these include excellent debtors and transparent processes. Moreover, Italian banks are practically not active in Africa.

You had no luck with French institutions either?

BNP Paribas is very well positioned on the continent. But we are, after all, an Italian company, and we cannot benefit from the agility and flexibility of the French network in Africa, which can be observed in the Francophone countries in particular. Nor did I get anywhere with development banks.

Do you find the Italian presence in Africa expandable?

Beyond energy and infrastructure and some very successful activities in agriculture, food processing and textiles, there are unfortunately few Italian companies in Africa. I had a good insight into this during my two terms as president of Assafrica, the Africa and Middle East division of the Italian industry association Confindustria.

Better to take a regional approach

Do you have any advice for German SMEs who want to go to Africa?

That they think carefully about what exactly they are going to offer. Of course, they have to know their market and also the people they want to work with. How can you grow if you don’t know the people ?

Should one start in one country or with a regional strategy right away?

Definitely with a regional approach. Most markets are very small and offer only limited sales opportunities. Above all, there is an extreme amount of movement between countries. For example, many millions of Burkinabe people work in Ivorian agriculture or in Mali’s mining sector. People have to travel back and forth between the countries, transfer money or make phone calls – with corresponding added value, for which good offers are sought. The advantages of the currency are often forgotten in West Africa: with the CFA, the countries have a uniform currency that is pegged to the euro. This makes business much easier.

The interview took place in March 2021.