Waiting for the Expo, Milan puts itself to the test with an event including five international meetings devoted to the theme of the new technologies and innovation. The subjects that will be discussed are: broadband, wireless networks, synergies between hi-tech and culture, wearable technologies, internet of things, robotics and smart cities.

Before the imminent opening of Expo 2015, Milan prepares itself with a series of events concerning new technologies. In fact, the first Disruptive Week is taking place in the Lombard city these days; it is a series of meetings for the lovers and experts on innovation, organized by Innovability, a reference point for the Italian ICT operators. Five events spread over four days: “M2M Forum”, “Disruptive Broadband”, “ArteQ”, “RoboBusiness Europe” and “WT-Wearable Technologies Conference”. Two locations: Atahotel Expo Fiera and Mercedes Benz Center.

As for “M2M Forum” (28–29 April), it is not the first real event; in fact, it has been taking place since 2002. This 14th edition is mainly focused on the so-called “IoX”, the meeting between Internet of things and Internet of people, and on “Smart Energy”, a mix of solutions for the energy efficiency and the development of smart cities. The objective is to put in touch and create synergies between the historic operators in the world of electronics and innovation and the new players involved in the web 2.0 and in the crowdesign.

The internet of things and its possible practical applications also play a leading role in the RoboBusiness Europe (29–30 April), the only stage in the old continent of the American Conference & Expo RoboBusiness. The main subject of the Conference is, in fact, the presentation of a new research about the Internet of Robotic Things, where the Internet of Things meets robotics. Another chapter is dedicated to “Chief Robotics Officer”, a hypothetical company figure combining the skills of traditional IT with that involved in the smart machines.

Disruptive Broadband (28 April), however, concerns entirely the expansion of broadband, wireless and cabled networks, whose main topic is the development of the town public networks.

ArtQ (29 April), is based on the possible connections between the world of technology and the worlds of art and tourism. The former is more and more able to make instruments, particularly mobile, to improve and enhance the possibility of benefiting from archaeologic and natural sites, museums, monuments and works of art.

Finally, after stopping off in Monaco, San Francisco and Taipei, “WT-Wearable Technologies Conference” will arrive in Milan (29 April), it is an event devoted to the world of wearable technologies and to its combination with the fields of fashion and luxury. 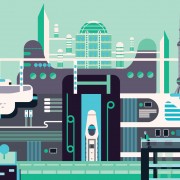 TLC – VUETEL ITALIA WILL LAUNCH ON THE MARKET ITS DATA SERVICE IN AFRICA|...